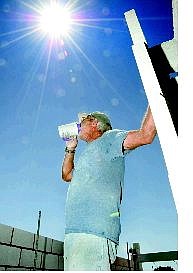 Nevada Appeal news service Richard Gilder, of Fallon, takes a break from laying cinder block in 100-plus degree weather to quench his thirst. Gilder has been drinking 2-3 gallons of water per day during the heat wave.