Community comes through for student who wanted to go to Washington, D.C. 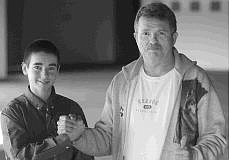 Rick Gunn/Nevada Appeal Justin Riker, 14, gets a congratulatory handshake from his grandfather, Robert Schirlls, at the Nevada Appeal on Thursday. He will be going to Washington, D.C., with funds raised by the community.