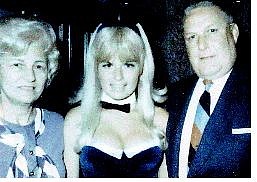 Submitted photo As a bunny, Janice Elliott is pictured with her parents.