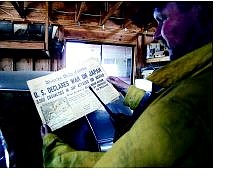 BRAD HORN/Nevada Appeal Stan Heinrichs, the superintendent for Morning Star Hot Shots, of Carson City holds up a newspaper found in one of the classic cars housed in Jerry Wright&#039;s garage at the top of Pinion Road on Thursday.