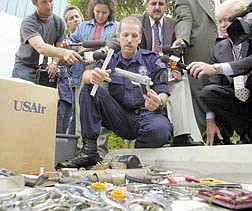 Los Angeles Police Officer Robert Rios holds-up a plastic gun as he displays knives, hammers, screwdrivers, kitchen untensils and other weapon-like items confiscated from passengers that are no longer permitted in carry-on baggage Tuesday, Sept. 18, 2001, at Los Angeles International Airport. More than 5,000 items a day are confiscated during intensive screening techniques at security checkpoints around LAX. Federal inspectors who uncovered lapses in airport security over the last decade proposed fines in just one-quarter of the cases, a record critics say underscores weaknesses in oversight of the system that protects the nation&#039;s air travelers. (AP Photo/Nick Ut)