Carson residents scramble for the Stars and Stripes 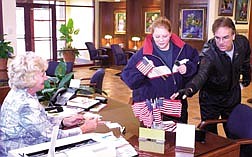