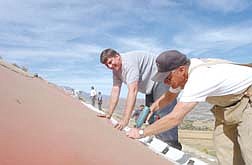 Rick Waltz, left and Mark Green drives screws into the twelvtha 120 foot wide American flag on C Hill. The flag was completed today with the help of inmates from Stewart Camp, but still needs to be cleaned due to a build up of static eletricity which attacted dirt until it was grounded. Photo by Brian Corley