Bavarian spirit smack in the middle of Minden 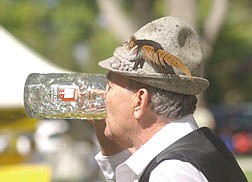 Al Gruber finishes off a beer during a break from playing polka music with his band during a previous Sertoma Oktoberfest celebration.