Guilty over Costco, these concerned citizens aren't going away. 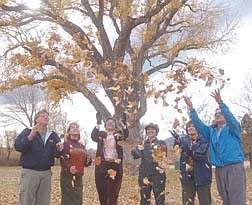 Mike Hoffman, left, Susan Hoffman, Isabel Espinoza, Eileen Cohen, Vivian Kuhn and Jon Nowlin throw leaves into the air that have fallen across Fuji Park. The group is hoping to save the fairgrounds from being developed into commercial property. Photo by Brian Corley