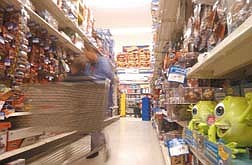 Holiday shoppers flocked to stores to mark items off their list in time for Christmas. Hot sellers on the toy list included bikes, talking dolls and anything having to do with the Harry Potter movie. Photo by Brian Corley