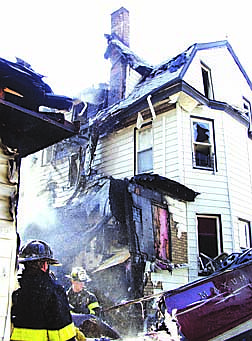 Firefighters look thorugh debris that landed in the backyard of a house at at the scene of the crash of an American Airlines jetliner en route to the Dominican Republic with 255 people aboard crashed moments after takeoff from Kennedy Airportin the Queens borough of New York, Monday, Nov 12, 2001. (AP Photo/John-Marshall Mantel)