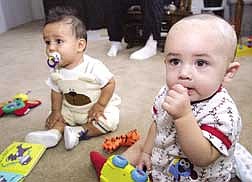 photo by Cathleen AllisonChristina Ortega, 7 months, left, and Dakota Pacheco, 8 months, play on Monday afternoon in North Casrson. Both boys had surgery to correct a craniosynostosis, a premature closure of the skull bones.