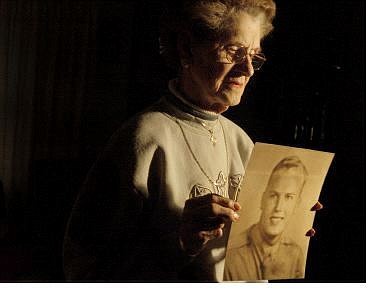 Steve Mellon/Pittsburgh Post-Gazette Lois Shriver holds a photograph Oct. 22 in Emsworth, Pa., of her brother, Ernest Munn, made months before his death in 1942. When a flight crew training for combat in World War II disappeared in the Sierra Nevada on Nov. 18, 1942, four families, including that of Munn, were left waiting for a word, for a body to bury and mourn. Now, 63 years later, one family might get their wish. Military anthropologists analyzing the well-preserved body of an airman found encased in ice last month in Kings Canyon National Park have narrowed their options to four men who flew out of Sacramento&#039;s Mather Field. The details and the wait are nerve-racking to Lois Shriver, who was never able to bury her brother, a cadet with slicked-back blond hair who still smiles in the family picture. 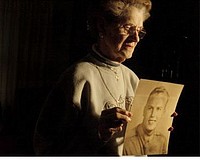 'It's been a long struggle'