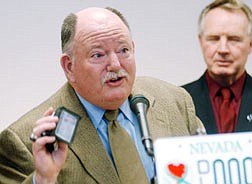 Bernie Anderson, Assembly Majority Whip, holds up his donor driver&#039;s liscense tell other legislative members how easy it was to become a organ donor. Donor registration has jumped from five percent to 32 percent in the last two years according to Dawn Gibbons, who has helped campaign the organ donor drive. Photo by Brian Corley 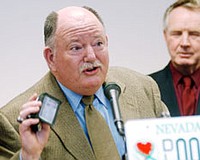