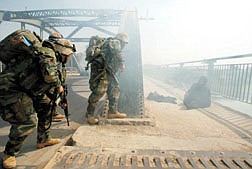 U.S. Army soldiers from A Company 3rd Battalion 7th Infantry Regiment approach an injured woman who was caught in the crossfire with Iraqi forces over the Euphrates River when the U.S. Army siezed a bridge in Al Hindiyah, Iraq Monday, March 31, 2003. The Army&#039;s Task Force 4-64, part of the 3rd Infantry Division, took the strategic bridge in it&#039;s move north towards Baghdad. The woman, who was near a dead civilian man, was bleeding and apparently shot in the buttock. (AP Photo/John Moore) 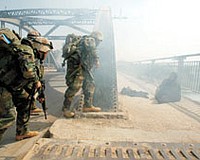