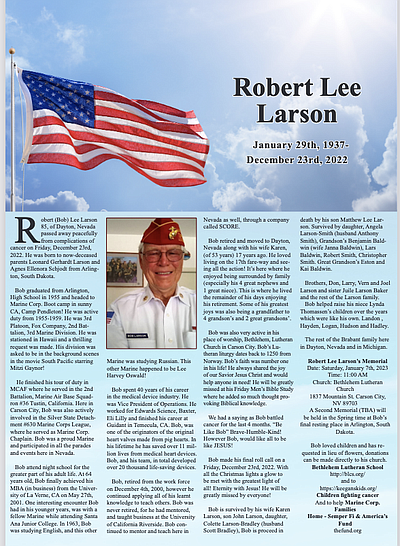 Bob graduated from Arlington, High School in 1955 and headed to Marine Corp. Boot camp in sunny CA, Camp Pendleton! He was active duty from 1955-1959. He was 3rd Platoon, Fox Company, 2nd Battalion, 3rd Marine Division. He was stationed in Hawaii and a thrilling request was made. His division was asked to be in the background scenes in the movie South Pacific starring Mitzi Gaynor!

He finished his tour of duty in MCAF where he served in the 2nd Battalion, Marine Air Base Squadron #36 Tustin, California. Here in Carson City, Bob was also actively involved in the Silver State Detachment #630 Marine Corps League, where he served as Marine Corp. Chaplain. Bob was a proud Marine and participated in all the parades and events here in Nevada.

Bob attend night school for the greater part of his adult life. At 64 years old, Bob finally achieved his MBA (in business) from the University of La Verne, CA on May 27th, 2001. One interesting encounter Bob had in his younger years, was with a fellow Marine while attending Santa Ana Junior College. In 1963, Bob was studying English, and this other Marine was studying Russian. This other Marine happened to be Lee Harvey Oswald!

Bob spent 40 years of his career in the medical device industry. He was Vice President of Operations. He worked for Edwards Science, Baxter, Eli Lilly and finished his career at Guidant in Temecula, CA. Bob, was one of the originators of the original heart valves made from pig hearts. In his lifetime he has saved over 11 million lives from medical heart devices. Bob, and his team, in total developed over 20 thousand life-saving devices.

Bob, retired from the work force on December 4th, 2000, however he continued applying all of his learnt knowledge to teach others. Bob was never retired, for he had mentored, and taught business at the University of California Riverside. Bob continued to mentor and teach here in Nevada as well, through a company called SCORE.

Bob retired and moved to Dayton, Nevada along with his wife Karen, (of 53 years) 17 years ago. He loved living on the 17th fare-way and seeing all the action! It’s here where he enjoyed being surrounded by family (especially his 4 great nephews and 1 great niece). This is where he lived the remainder of his days enjoying his retirement. Some of his greatest joys was also being a grandfather to 4 grandson’s and 2 great grandsons’.

Bob was also very active in his place of worship, Bethlehem, Lutheran Church in Carson City. Bob’s Lutheran liturgy dates back to 1250 from Norway. Bob’s faith was number one in his life! He always shared the joy of our Savior Jesus Christ and would help anyone in need! He will be greatly missed at his Friday Men’s Bible Study where he added so much thought provoking Biblical knowledge.

Bob made his final roll call on a Friday, December 23rd, 2022. With all the Christmas lights a glow to be met with the greatest light of all! Eternity with Jesus! He will be greatly missed by everyone!

Brothers, Don, Larry, Vern and Joel Larson and sister Juile Larson Baker and the rest of the Larson family.

Bob helped raise his niece Lynda Thomassen’s children over the years which were like his own. Landon , Hayden, Logan, Hudson and Hadley.

The rest of the Brabant family here in Dayton, Nevada and in Michigan.

A Second Memorial (TBA) will be held in the Spring time at Bob’s final resting place in Arlington, South Dakota.

Bob loved children and has requested in lieu of flowers, donations can be made directly to his church.
Bethlehem Lutheran School
http://blcs.org/