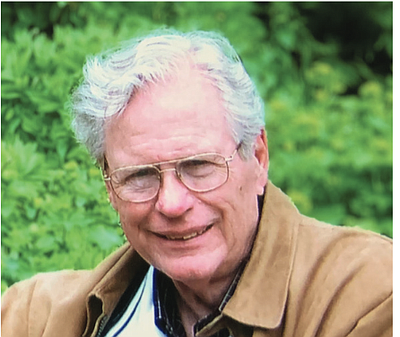 He was born to Michael and Loretta Holzhauer in Milwaukee, Wis., March 4, 1933, and named Franklin in honor of Franklin D. Roosevelt who was first inaugurated as President that same day.

He graduated in 1951 from Boys Technical School in Milwaukee and in 1955 married his high
school sweetheart, Janice Schmidt. Frank enlisted in the U.S. Naval Reserve from 1951 to
1960 and served as a Torpedoman’s Mate (Submarine Service), achieving the rank of Petty Officer Second Class. He also worked as a bus operator. He was awarded a Bachelor of Science degree with honors in Industrial Education in January 1967 and a Master of Science in Guidance and Counseling in August 1967 from Stout State University in Menomonie, Wis.

He moved to Nevada where he began his career in rehabilitation and program management with the State of Nevada. He and Janice made Carson City their home in 1970 and raised three children together before Janice’s death in 1987. Frank held numerous positions within the State’s Rehabilitation Division and Health Department, even serving for a time as Acting Director of the Nevada State Department of Health. He retired in 1996 and moved to Dayton where he enjoyed playing golf several days a week at the Dayton Valley Golf Club.

Frank found love and joy again, and in 2003 married Carol Gibson. Together Frank and Carol
pursued a mutual love of travel and enjoyed many cruises to experience places and cultures
from Tahiti and Norway, to Brazil and Cuba. Frank was a long-time member of St. Teresa of Avila Catholic Church and St. Ann’s of the Comstock Catholic Church. He was a faithful member of the Knights of Columbus, serving as Grand Knight of Sierra Madre Council 4781 and as Nevada State Deputy from 1983 to 1985.

Frank is survived by his wife Carol Holzhauer of Dayton and his children Lynette Holzhauer (Walter), Pauline Storum (Bill) and Eric Holzhauer, as well as five grandchildren: Hannah, Keil, Cross, Karsyn and Danika.

Always a man of service, he was the most wonderful husband and father who ever lived.

The funeral mass will be held at St. Ann’s of the Comstock Catholic Church in Dayton at 10 a.m. on Sept. 27th.

In lieu of flowers, the family requests donations be made in Frank’s name to the Best Friends
Animal Society (www.bestfriends.org).