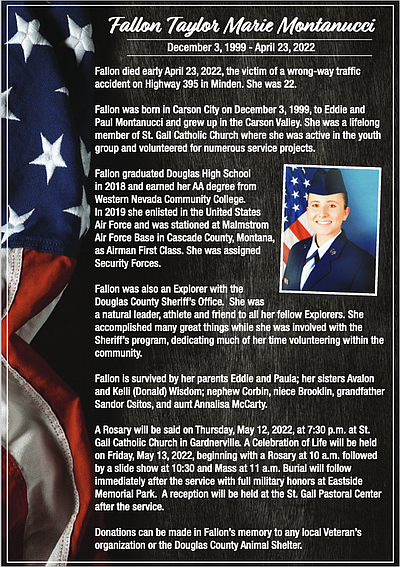 Fallon was born in Carson City on December 3, 1999, to Eddie and Paul Montanucci and grew up in the Carson Valley. She was a lifelong member of St. Gall Catholic Church where she was active in the youth group and volunteered for numerous service projects.

Fallon graduated Douglas High School in 2018 and earned her AA degree from Western Nevada Community College. In 2019 she enlisted in the United States Air Force and was stationed at Malmstrom Air Force Base in Cascade County, Montana, as Airman First Class. She was assigned Security Forces.

Fallon was also an Explorer with the Douglas County Sheriff’s Office. She was a natural leader, athlete and friend to all her fellow Explorers. She accomplished many great things while she was involved with the Sheriff’s program, dedicating much of her time volunteering within the
community.

A Rosary will be said on Thursday, May 12, 2022, at 7:30 p.m. at St. Gall Catholic Church in Gardnerville. A Celebration of Life will be held on Friday, May 13, 2022, beginning with a Rosary at 10 a.m. followed by a slide show at 10:30 and Mass at 11 a.m. Burial will follow
immediately after the service with full military honors at Eastside Memorial Park. A reception will be held at the St. Gall Pastoral Center after the service.