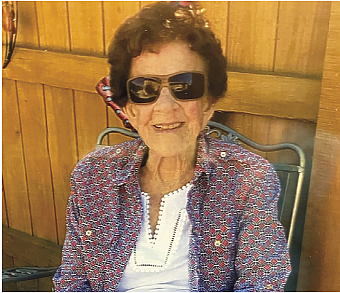 The family of Arlene Verna Gleich, 89, is saddened to announce her peaceful passing on the morning of Sunday, February 20, 2022 in her Gardnerville home with family by her side.

Among her survivors, Arlene will be lovingly remembered by her daughter, Yvonne; grandchildren, Michelle, Stephen and Jonathan; great-grandchildren, Nathaniel and Madelynn; and siblings, Donald; along with numerous other family members and friends within her community.

She was preceded in death by her parents, Joseph and Ethel; husband, Vernon; daughter, Diana; and siblings, Rosalie and Edward.

Arlene was born December 18, 1932, in Omaha, Nebraska to Joseph and Ethel Klabouch. After moving to Long Beach, California she would obtain a business degree from Long Beach State College. In Southern California, she would go on to meet Vernon Gleich, a navy man stationed at the Long Beach Naval Base, and they would marry in 1951 in Yuma, Arizona. They would have a loving marriage for 25 years and go on to have two children.

She was most well known as a prominent businesswoman in San Pedro, CA. In 1960, Arlene joined Green Hills Cemetery as Comptroller and would rise to President/Chief Executive Officer by the 1980’s. Upon moving to Minden, Nevada in 1992 to “retire” she also took on establishing Eastside Memorial Park as a beautiful park that provides healing memories in the role as General Manager.

Arlene was no stranger to hard work and advocated for her community. She was very active in Soroptimist International, literary groups and her catholic church groups. She held various leadership positions and fervently believed in serving her beloved charities and community.

A memorial service for Arlene will be held at St. Galls in Minden, Nevada on Monday March 7th at 11am.
Memorial contributions in Arlene’s name may be made Soroptimist International of Carson City online or mailed to SICC PO Box 794 Carson City NV 89702.
To share a memory of Arlene Gleich, please visit www.fitzhenrysfuneralhome.net