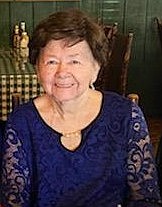 She was born September 25, 1945 in Santa Maria, California to Lowell Walter Ball and Evelyn Louise Marlett, the youngest of five children.

She lived in Athens, Greece for two years while her husband was stationed there with the US Air Force. She traveled to Wheelus Air Base in Tripoli, Libya where she had her first child.

She and her family moved to Carson City in 1980 where she was mostly a stay at home Mom until her children were grown and she then went to work for the State of Nevada and retired in 2008 after 18 years of service.

For a time she was active in the American Legion and served a year as President of the High Desert Post 56 Women’s Auxiliary.

She was predeceased by her parents, her sister Beverly, and her brother Larry.

She is survived by her brothers Roland and Marvin as well as her husband Jack and their four children. She is also survived by her seven grandchildren: William, Wyatt, and Wyler (Julie), Jeffrey and Aaron (Jaynnie), Justine (Jack III), and Kori (Janine), and three great grandchildren: Oliver and Charlie (Justine) and Jaxson (Jeffrey).

A private memorial will be held at a later date.