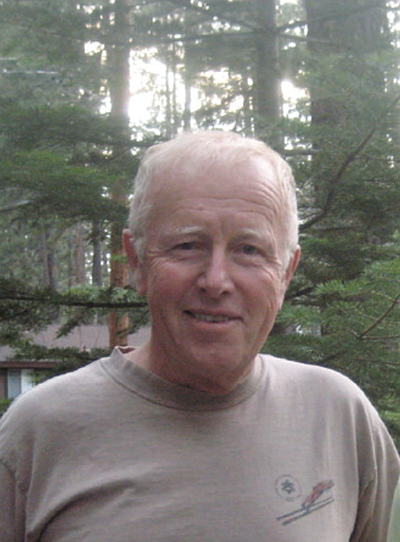 Samuel Kelly Ward passed away peacefully at home with family by his side on July 19, 2022 from the effects of Leukemia.

Sam was born in Yakima, WA, to Shirley and Edine Ward and spent his youth with his brother, Tom, on the family hop farm and cattle ranch. The boys filled their time with fishing and hunting in Central Washington, skiing at White Pass, and playing baseball with the Wiley City
Wildcats. He graduated from West Valley High School in 1959. Sam was an accomplished downhill ski racer and earned a full ride scholarship to the University of Colorado Boulder on the ski team. Sam transferred to the University of Washington where he obtained a business degree and met his wife, Sheila (Winters). After various logging, ranching and real estate jobs in Washington, Sam and Sheila moved to her hometown of Carson City in 1972 where they raised 5 children and enjoyed living near her parents and helping on their ranch. Sam started his Real Estate Appraisal career in 1983 and continued working throughout Northern Nevada until shortly before his death.

Known for his love for the outdoors, Sam snow-skied through the 2021 season and hiked up “C Hill” almost every day with his succession of Springer Spaniels. He was an engaged and fun dad coaching soccer and skiing, teaching his kids to hunt, fish, ride horses, waterski, and
to appreciate the beauty of God’s creation. Sam loved traditional country and classical music, cowboy poetry and art, history, politics, horses, working with his hands, enjoying old friends, and making new ones wherever he went. Life is a gift, and he lived it. Most of all, Sam was committed to faith and family. He was enormously generous to the many local churches he was a member of over the years as well as to people in need, often going out of his way to help. Sam enjoyed his last years of life spending quality time with his children and grandchildren in Carson, Lake Tahoe and traveling throughout the West.

He leaves behind his wife, Sheila (née Winters) of 57 years, half siblings Pat, Mary (Eric) Bosell, and Ted Ward, sons Tom (Nikki) and George (Gegi), daughters Sarah (Jon-Christopher) Myers, Anne (Ben) Cater, and Elizabeth (Jesse) Lovejoy, along with 13 grandchildren in California, Nevada, Utah and Washington. Those who knew him would agree that there was no one like Sam Ward in his unique wit, friendliness, intelligence, and a no-nonsense determination for life. He could be gruff and a little salty, but under it all was an incredible tenderness of heart. His family deeply mourns his loss but rejoices in the comfort
of knowing he is with his Savior, Jesus Christ.

In lieu of flowers, please consider donations to cancer research through the Fred Hutch Obliteride (participants Tom and George Ward), the Huntsman Cancer Foundation, or a blood donation to the American Red Cross. There will be a memorial service at Mountain Vista Baptist Church on September 3, 2022 at 1 pm (1750 Mountain St, Carson City). Funeral arrangements and online memoir provided by Autumn Funerals and Cremations.