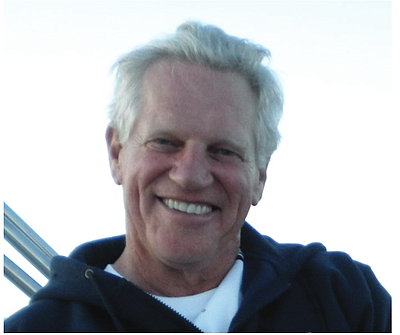 Dick, my beloved husband of 15 years, died suddenly on July 18, 2022, in a tragic boating
accident on Lake Tahoe. My loss is beyond words. Bereft. Alone. The depth of my sorrow is unmeasurable.

Dick was the kindest, most wonderful man I’ve ever known. He was loved and admired by all who knew him. He was genius-level smart, but he never made others feel less then. If you wanted to know a thing, he’d explain it to you. But he wouldn’t waste time trying to smarten up a chump. He did not suffer fools.

He did not go gently into that good night. Through difficult health issues, he prevailed, struggled, and fought, always with dignity and strength.

He loved me immensely and told me so every day. I was everything to him, and he to me. He was romantic and tender, adventurous, funny and fun.

Dick earned his BS from UC Berkeley and his PhD in BioPhysics from UC San Diego. Dick served at the University of Michigan between 1970-2000, rising to the rank of Senior Distinguished Research Biophysicist due to his significant contributions to the science of
electron paramagnetic resonance (EPR). Dick was a collaborator and research scientist with Richard H. Sands, and then after Dr. Sands retired from U. Michigan in the early 1990s, took charge of the EPR laboratory in the Biophysics department and acted as an advisor to several
graduate students. During his tenure at the University of Michigan, Dick was a well-loved and respected scientist with a seemingly boundless knowledge of physics and an obvious passion for good science. Dick wrote some of the first simulation software for EPR experiments. Some
of his research interests were in the characterization and regulation of metal-ion-containing enzymes.

Dick was a true renaissance man. His father taught him carpentry; he could build just about anything, including houses. There was nothing he couldn’t fix. His nephews called him, “the strongest man on earth.” He once lifted a fallen tractor off his father.

He was known for his cheerfulness, his beautiful smile, and his optimism. He always said, “It’s a choice.” He was a hard worker, and he never complained about a thing. He invariably had several projects going. He loved working on projects with his sons.

Dick is survived by his wife, Jeanette; his beloved and cherished sons, Tom and Steve
Dunham; and his sisters Donna Wilcox and Peggy Sue Moore. He had five grandchildren, all of whom he loved deeply: Drew Dunham, Ben Dunham, Leah Dunham, Lucas Dunham, and Jacob Dunham.

A memorial service will be held in late August.