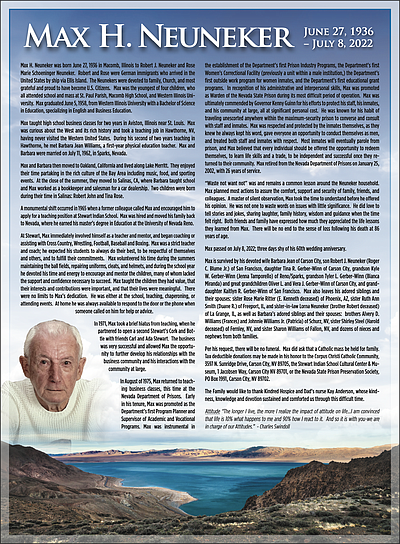 Max H. Neuneker was born June 27, 1936 in Macomb, Illinois to Robert J. Neuneker and Rose Marie Schoeninger Neuneker. Robert and Rose were German immigrants who arrived in the United States by ship via Ellis Island. The Neunekers were devoted to family, Church, and most grateful and proud to have become U.S. Citizens. Max was the youngest of four children, who all attended school and mass at St. Paul Parish, Macomb High School, and Western Illinois University. Max graduated June 5, 1958, from Western Illinois University with a Bachelor of Science in Education, specializing in English and Business Education.

Max taught high school business classes for two years in Aviston, Illinois near St. Louis. Max was curious about the West and its rich history and took a teaching job in Hawthorne, NV, having never visited the Western United States. During his second of two years teaching in Hawthorne, he met Barbara Jean Williams, a first-year physical education teacher. Max and Barbara were married on July 11, 1962, in Sparks, Nevada.

Max and Barbara then moved to Oakland, California and lived along Lake Merritt. They enjoyed their time partaking in the rich culture of the Bay Area including music, food, and sporting events. At the close of the summer, they moved to Salinas, CA, where Barbara taught school and Max worked as a bookkeeper and salesman for a car dealership. Two children were born during their time in Salinas: Robert John and Tina Rose.

A monumental shift occurred in 1965 when a former colleague called Max and encouraged him to apply for a teaching position at Stewart Indian School. Max was hired and moved his family back to Nevada, where he earned his master’s degree in Education at the University of Nevada Reno.

At Stewart, Max immediately involved himself as a teacher and mentor, and began coaching or assisting with Cross Country, Wrestling, Football, Baseball and Boxing. Max was a strict teacher and coach; he expected his students to always do their best, to be respectful of themselves and others, and to fulfill their commitments. Max volunteered his time during the summers maintaining the ball fields, repairing uniforms, cleats, and helmets, and during the school year he devoted his time and energy to encourage and mentor the children, many of whom lacked the support and confidence necessary to succeed. Max taught the children they had value, that their interests and contributions were important, and that their lives were meaningful. There were no limits to Max’s dedication. He was either at the school, teaching, chaperoning, or attending events. At home he was always available to respond to the door or the phone when someone called on him for help or advice.

In 1971, Max took a brief hiatus from teaching, when he partnered to open a second Stewart’s Cork and Bottle with friends Carl and Ada Stewart. The business was very successful and allowed Max the opportunity to further develop his relationships with the business community and his interactions with the community at large.

In August of 1975, Max returned to teaching business classes, this time at the Nevada Department of Prisons. Early in his tenure, Max was promoted as the Department’s first Program Planner and Supervisor of Academic and Vocational Programs. Max was instrumental in the establishment of the Department’s first Prison Industry Programs, the Department’s first Women’s Correctional Facility (previously a unit within a male institution,) the Department’s first outside work program for women inmates, and the Department’s first educational grant programs. In recognition of his administrative and interpersonal skills, Max was promoted as Warden of the Nevada State Prison during its most difficult period of operation. Max was ultimately commended by Governor Kenny Guinn for his efforts to protect his staff, his inmates, and his community at large, all at significant personal cost. He was known for his habit of traveling unescorted anywhere within the maximum-security prison to converse and consult with staff and inmates. Max was respected and protected by the inmates themselves, as they knew he always kept his word, gave everyone an opportunity to conduct themselves as men, and treated both staff and inmates with respect. Most inmates will eventually parole from prison, and Max believed that every individual should be offered the opportunity to redeem themselves, to learn life skills and a trade, to be independent and successful once they returned to their community. Max retired from the Nevada Department of Prisons on January 25, 2002, with 26 years of service.

“Waste not want not” was and remains a common lesson around the Neuneker household. Max planned most actions to assure the comfort, support and security of family, friends, and colleagues. A master of silent observation, Max took the time to understand before he offered his opinion. He was not one to waste words on issues with little significance. He did love to tell stories and jokes, sharing laughter, family history, wisdom and guidance when the time felt right. Both friends and family have expressed how much they appreciated the life lessons they learned from Max. There will be no end to the sense of loss following his death at 86 years of age.

Per his request, there will be no funeral. Max did ask that a Catholic mass be held for family. Tax deductible donations may be made in his honor to the Corpus Christi Catholic Community, 3597 N. Sunridge Drive, Carson City, NV 89705, the Stewart Indian School Cultural Center & Museum, 1 Jacobsen Way, Carson City NV 89701, or the Nevada State Prison Preservation Society, PO Box 1991, Carson City, NV 89702.

The Family would like to thank Kindred Hospice and Dad’s nurse Kay Anderson, whose kindness, knowledge and devotion sustained and comforted us through this difficult time.

Attitude “The longer I live, the more I realize the impact of attitude on life...I am convinced that life is 10% what happens to me and 90% how I react to it. And so it is with you-we are in charge of our Attitudes.” - Charles Swindoll