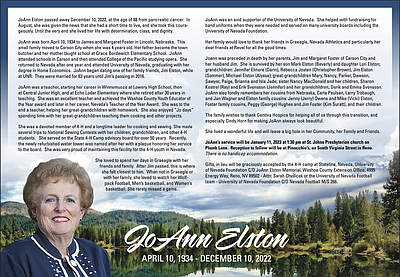 JoAnn Elston passed away December 10, 2022, at the age of 88 from pancreatic cancer. In August, she was given the news that she had a short time to live, and she took this coura- geously. Until the very end she lived her life with determination, class, and dignity.

JoAnn was born April 10, 1934 to James and Margaret Foster in Lincoln, Nebraska. This small family moved to Carson City when she was 4 years old. Her father became the town butcher and her mother taught school at Grace Bordewich Elementary School. JoAnn attended schools in Carson and then attended College of the Pacific studying opera. She returned to Nevada after one year and attended University of Nevada, graduating with her degree in Home Economics. JoAnn began dating one of her family friends, Jim Elston, while at UNR. They were married for 63 years until Jim’s passing in 2016.

JoAnn was a teacher, starting her career in Winnemucca at Lowery High School, then at Central Junior High, and at Echo Loder Elementary where she retired after 30 years in teaching. She was an excellent teacher and achieved the Washoe County Youth Educator of the Year award and later in her career, Nevada’s Teacher of the Year Award. She was to the end a teacher, helping her great-grandchildren with homework. She also enjoyed “Jo days” spending time with her great-grandchildren teaching them cooking and other projects.

She was a devoted member of 4-H and a longtime leader for cooking and sewing. She made several trips to National Sewing Contests with her children, grandchildren, and other 4-H students. She served on the State 4-H Camp advisory board for over 50 years. Recently, the newly refurbished water tower was named after her with a plaque honoring her service to the board. She was very proud of maintaining this facility for the 4-H youth in Nevada.

Her family would love to thank her friends in Graeagle, Nevada Athletics and particularly her dear friends at Revel for all the good times.

The family wishes to thank Gentiva Hospice for helping all of us through this transition, and especially Cindy Horn for making JoAnn always look beautiful.

She lived a wonderful life and will leave a big hole in her Community, her Family and Friends.

JoAnn’s service will be January 11, 2023 at 1:30 pm at St. Johns Presbyterian church on Plumb Lane. Reception to follow will be at Pinocchio’s, on South Virginia Street in Reno. There is no handicap accommodation.