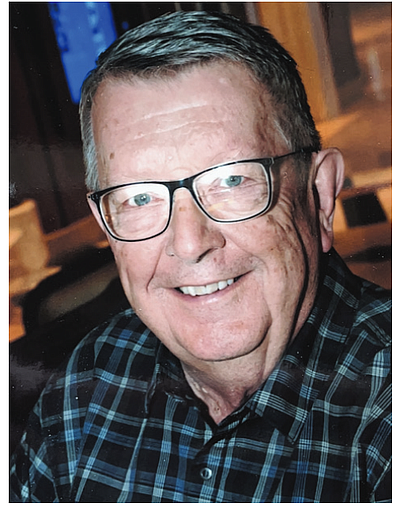 Gerald Stephen “Steve” Bilyeu of Carson City passed away peacefully at his home on December 4, 2022 after a valiant fight with cancer.

Steve was born February 12, 1945 in Tulsa, Oklahoma to Casper “Cap” W. and Grace Hogan Bilyeu. He graduated from Carson High School and furthered his education at Oklahoma State University, University of California, Berkeley, and ultimately graduated from the University of Nevada, Reno. He was a member of the Delta Chi Fraternity.

Steve enjoyed a career as a certified public accountant and retired as Vice President at the Carson Station Hotel & Casino. Following his retirement he enjoyed spending time with his family and traveling with his wife, Sally.

Steve enjoyed serving his community in multiple volunteer positions, including Past President of Rotary Club of Carson City, Western Nevada Society of CPAs, the Carson City Chamber of Commerce; Treasurer, Rotary District 5190, Casino and Hotel Accountants of Nevada, St. Peter’s Episcopal Church, and Camp Galilee. He also served many years as Chairman and as a
member of the Carson City Convention and Visitors Bureau Board of Directors and on the Northern Nevada Railway Foundation.

Steve is survived by his loving family, which includes his wife of 43 years, Sally, sons Ricky Bilyeu and Cameron Green (Becky), and Becky’s sons, Andrew and Eric.

A celebration of life will be held at 11:00 a.m. on Saturday, December 17, 2022 at St. Peter’s Episcopal Church at the corner of Telegraph and Division Streets, Carson City, NV.

As Steve honored volunteerism and serving his community, memorial contributions may be made to the Carson City Rotary Club Foundation or to the charity of your choice