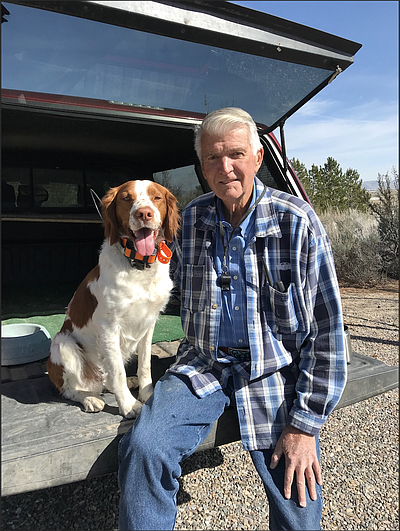 Alan Earl Phillips died in Gardnerville, Nevada, on October 9, 2022, at the age of 83. After a hard-fought battle against cancer, he passed peacefully in his home surrounded by his family. He was a loving brother, father, grandfather, and friend, and he will be deeply missed.

Alan was born on January 9, 1939, in Los Angeles, California, to Earl Cummings Phillips and Alyce Brown. An adventurer from the start, his childhood was spent exploring his backyard of Arcadia, camping, hiking, fishing, and sporting. In the sixth grade, Alan found what would become his lifelong group of friends — nature enthusiasts like himself with whom he could share his passion for wildlife, and all the pleasures, thrills, and lessons that come with its pursuit.

In 1959, Alan joined the Marines, and after graduating from university, he took the helm at his father’s trucking company. When he wasn’t managing trucks on the road, he often flew his Cessna 172 in the sky. As a licensed pilot, he flew all over California, Colorado, and Arizona, sometimes soaring as far as the East Coast, Cabo San Lucas, and Baja, Mexico.

Alan’s love of nature and the great outdoors was a constant theme in his life. He owned a 380-acre ranch in Colorado and spent five years working as a ranch hand. He took his family to Mexico, teaching them to survive and live off the land. Alan went on Safari to Africa twice, traveling on the Blue Train through one of the world’s finest game parks. Alan also traveled extensively throughout the United States, visiting all 50 states.

In 1976, Alan wed, becoming a stepfather to Rebecca and Jeff, and in 1978, he and his wife Beth gave birth to their daughter Robyn. Alan passed on his adoration for animals and his wonder for the wilderness to his children. He was a patient teacher sitting beside them while they did their homework. “Keep things simple,” he always told them — Phillips Rule of Living #1

Alan was a dedicated firearms collector/dealer, avid ethical sportsman, and clay target shooter. Alan was a highly successful competition shooter and won numerous awards for his shooting during his lifetime. He was a cherished member of the sporting gun community. He became a founding member of the Carson Valley Clays shooting facility, serving as CFO and on the Board of Directors. He was also a hunter safety class instructor. In addition, he was well known as a resource for younger and less experienced collectors and sportsmen, always offering to help them with an essential bit of knowledge he had acquired.

By his family, Alan will be remembered as reliable, honest, intelligent, and disciplined. A source of great calm, who was full of strength and stability. He is survived by his daughters, Robyn Phillips and Rebecca Virtue; his son Jeff Blackmore; his sisters Karen Friedberg, Dawn McIntire, and Connie Dayton; his three grandchildren; and his cherished companion, his dog Deacon.

In place of flowers, the family has asked that friends and family of Alan consider honoring his memory by donating to the Nature Conservancy, https://preserve.nature.org/, to which he also set aside a portion of his estate.