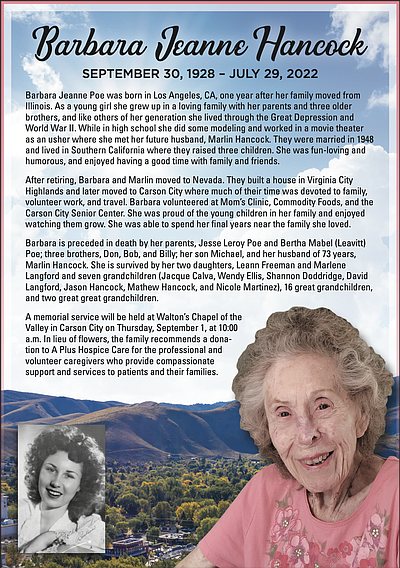 Barbara Jeanne Poe was born in Los Angeles, CA, one year after her family moved from Illinois. As a young girl she grew up in a loving family with her parents and three older brothers, and like others of her generation she lived through the Great Depression and World War II. While in high school she did some modeling and worked in a movie theater as an usher where she met her future husband, Marlin Hancock. They were married in 1948 and lived in Southern California where they raised three children. She was fun-loving and humorous, and enjoyed having a good time with family and friends.

After retiring, Barbara and Marlin moved to Nevada. They built a house in Virginia City Highlands and later moved to Carson City where much of their time was devoted to family, volunteer work, and travel. Barbara volunteered at Mom’s Clinic, Commodity Foods, and the Carson City Senior Center. She was proud of the young children in her family and enjoyed watching them grow. She was able to spend her final years near the family she loved.

A memorial service will be held at Walton’s Chapel of the Valley in Carson City on Thursday, September 1, at 10:00 a.m. In lieu of flowers, the family recommends a dona- tion to A Plus Hospice Care for the professional and volunteer caregivers who provide compassionate support and services to patients and their families.