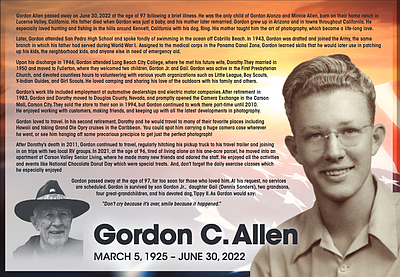 Gordon Allen passed away on June 30, 2022 at the age of 97 following a brief illness. He was the only child of Gordon Alonzo and Minnie Allen, born on their home ranch in Lucerne Valley, California. His father died when Gordon was just a baby, and his mother later remarried. Gordon grew up in Arizona and in towns throughout California. He especially loved hunting and fishing in the hills around Kennett, California with his dog, Ring. His mother taught him the art of photography, which became a life-long love.

Later, Gordon attended San Pedro High School and spoke fondly of swimming in the ocean off Cabrillo Beach. In 1943, Gordon was drafted and joined the Army, the same branch in which his father had served during World War I. Assigned to the medical corps in the Panama Canal Zone, Gordon learned skills that he would later use in patching up his kids, the neighborhood kids, and anyone else in need of emergency aid.

Upon his discharge in 1946, Gordon attended Long Beach City College, where he met his future wife, Dorothy. They married in 1950 and moved to Fullerton, where they welcomed two children, Gordon Jr. and Gail. Gordon was active in the First Presbyterian Church, and devoted countless hours to volunteering with various youth organizations such as Little League, Boy Scouts, Y-Indian Guides, and Girl Scouts. He loved camping and sharing his love of the outdoors with his family and others.

Gordon’s work life included employment at automotive dealerships and electric motor companies. After retirement in 1983, Gordon and Dorothy moved to Douglas County, Nevada, and promptly opened the Camera Exchange in the Carson Mall, Carson City. They sold the store to their son in 1994, but Gordon continued to work there part-time until 2010. He enjoyed working with customers, making friends, and keeping up with all the latest developments in photography.

Gordon loved to travel. In his second retirement, Dorothy and he would travel to many of their favorite places including Hawaii and taking Grand Ole Opry cruises in the Caribbean. You could spot him carrying a huge camera case wherever he went, or see him hanging off some precarious precipice to get just the perfect photograph!

After Dorothy’s death in 2011, Gordon continued to travel, regularly hitching his pickup truck to his travel trailer and joining in on trips with two local RV groups. In 2021, at the age of 96, tired of living alone on his one-acre parcel, he moved into an apartment at Carson Valley Senior Living, where he made many new friends and adored the staff. He enjoyed all the activities and events like National Chocolate Donut Day which were special treats. And, don’t forget the daily exercise classes which he especially enjoyed.

Gordon passed away at the age of 97, far too soon for those who loved him. At his request, no services are scheduled. Gordon is survived by son Gordon Jr., daughter Gail (Dennis Sanders), two grandsons, four great-grandchildren, and his devoted dog, Tippy II. As Gordon would say:

“Don’t cry because it’s over, smile because it happened.