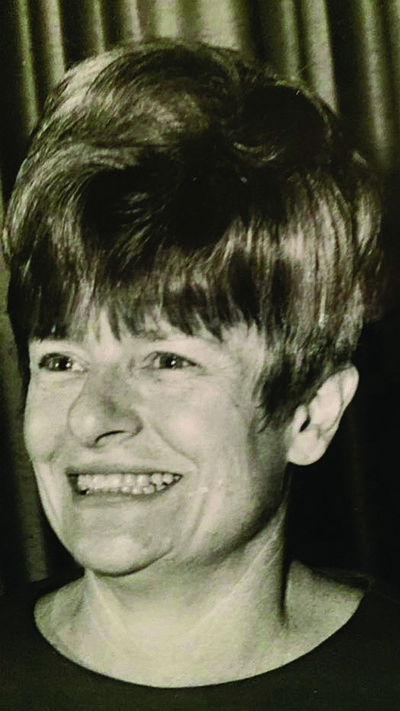 Marilyn Louise "Pug" Pruett Pochop died of natural causes on April 11, 2022, at her home in San Jose, CA. She passed in the presence of family, friends and caregivers who loved her dearly. She was the only daughter and the younger of two children born to Dale Beach Pruett and Reubel Louise Sweetland Pruett. She was a second generation native Carsonite. Her beloved older brother Beach William Pruett, preceded her in death at the early age of twenty-seven. It was very apparent that Marilyn and Beach enjoyed a mutual adoration for one another growing-up. They were quite the little dancing duo and best buds. We are blessed to have a treasured collection of utterly endearing photos of the pair, which all tell a lovely story in themselves. Marilyn is, also, preceded in death by her parents, her baby daughter, Christine Angel Pochop and her grandson, Chad Jason Hull.

Marilyn, aka "Pug," acquired her nickname in high school from her friends as she recalled "having a reputation for being pugnacious!" She was a 1943 graduate of Carson High School. She was a cheerleader, a member of the band, a good student and a Rainbow Girl. She admits to usually being the first to hop on-board for a prank or to assume the "leading-role" in any mischievous caper about to unfold. She easily garnered everyone's attention when she entered the scene and she loved the spotlight. She was naturally charming, witty and charismatic, traits which earned her many friendships, all of which she held dear.

Pug briefly attended UCLA after high school. She departed UCLA to attend Sawyer Business School in Beverly Hills. After completion, she returned to Nevada and attended UNR for three semesters where she studied aeronautics, weather/meteorology, botany…and boys! However, our gut tells us that she was most involved with and proud of being a "Pi Phi Girl!"

Where should we begin with Pug's "Paul Harvey Rest of the Story?!" Well, for starters, Pug was always rambunctious and full of unpredictable and boundless energy. She was a true "social butterfly," and many called her friend. Pug enjoyed a long life stuffed with many tales and accomplishments. We will hit the highlights which she claimed to enjoy the most.

Pug had a melodic "set of pipes." She sang hymns in the Presbyterian Church Choir, at local funerals and she loved to perform at the variety shows held at the old Carson Theater. She was in her element when she was center-stage, singing, dancing and joking with the crowd. Her wit and humor were unmatched, occasionally a bit risqué but was naturally quite keen. She was a hit singing Petula Clark's, "Downtown!"

Pug held many positions during her lifetime. Not that she couldn't hold a job, or that any were outside her scope; she just wanted to experience it all. And, so she did just that. Her work ethic was outstanding! Pug's first job, of course, was babysitting. She sat for Carson's favorite Family Practice Doc, Dr. and Mrs. Thom. Her first "real" job was a secretarial position at the Stewart Indian School. From there she moved into a receptionist/secretarial role for a local accountant. Soon she dabbled in journalism as the Society Editor for the Nevada Appeal and the Reno Gazette/Journal. She was a self-taught photographer and shot all of her own photos for her columns. These roles blossomed out of first writing the Recipe Column for the Nevada Appeal.

We recall mother being a great cook. She was known about town for her birthday cakes. However, my favorite part was always licking the frosting bowl. She, also, worked for the Carson City School District as the School Registrar. In 1966 she was appointed to Governor Paul Laxalt's Administration as his receptionist. This position evolved into a receptionist/
extradition secretary role. She eventually became the first non-attorney and woman to be elected President of the National Extradition Association of America. Governor Mike O'Callahan retained Pug in this position during his administration, prior to her deciding to relocate to California. She had a wide-range of talents and held many of these positions con-currently. She even made time for her hobbies; sewing custom draperies, knitting, gardening, Bridge, cooking and photography. She always decorated our home exquisitely for Christmas.

Pug departed Carson in 1971 for California. We were convinced that her move to California was due to her secret desire to be closer to Candlestick Park and her beloved S.F. Giants! Pug would admit to being a Giant's "groupie!" She was a true orange and black, "bye-bye baby" fan. She did bleed orange! Through good seasons and down-right embarrassing seasons, she never wavered with her loyalty or ever considered kicking "her boys" to the curb.

After moving to California, she eventually settled in Campbell, CA. Pug took a position with the Santa Clara Court System as the District Court Calendar Secretary. She went kicking and screaming into "retirement" in 1993. All positions are just the ones we can recall. No doubt there were many more. We are all quite sure she wore many more hats while we were sleeping.

Pug remained well-known and respected in Carson City during her lifetime, even after her move to California. She was the proprietor, landlord and large and in-charge of "Pruett Place," located at Curry, Telegraph and Nevada Streets, aka northwest corner of Telegraph Square. She was adored and held in high regard by all of the amazing tenants at "Pruett Place." The house at 402 N. Curry Street was Pug's childhood home and where she was born and raised.

All who knew Pug knew she was a staunch Republican. She was ready and willing to debate the issues, anytime, anyplace with anyone. She respected everyone's stance and expected the same in return. She was always willing to agree to disagree. She maintained a keen and sharp mind on most all matters through-out her lifetime and was known to be a bit feisty with a stubborn streak. We will always recall lovingly the good memories with mother. She loved life and surely lived it her way to the end.

Pug is survived by a small army of family. There are too many to list. It is very important to acknowledge several special people on Pug's behalf. Geraline Aquino, Pug's primary caregiver and Ilham Galab, mother's nightshift caregiver. Thank you for always going above and beyond the call of duty to meet all of mother's needs and wishes. You both are truly earth angels! Thank you both for all of your constant support, love, care and prayers!

Pug has requested cremation and burial at the Pruett Family Plot in Carson City, and to be laid to rest beside her father, Dale. She requested no formal services. She didn't want a party in her honor that she couldn't attend! The family will gather privately for a celebration of her life. In lieu of flowers, Pug asks that you vote Republican and only root for the S.F. Giants! If you hung in there and read our mama's story…a heartfelt "thank you!"

Rest easy, mama. You have found perfect peace in the arms of The Lord. We love you!