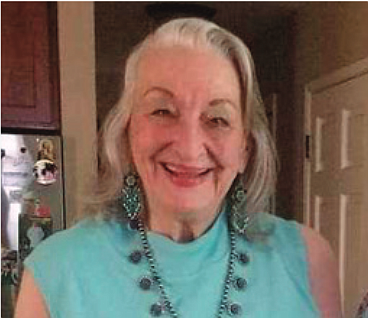 Born in Stockton, California, one of five children of Henry and Merle Castle; she grew up in Stockton, CA with her brothers Ken and Paul, and sisters Joyce and Carol, and attended St Mary’s High School in 1954.

She moved to San Jose, CA in the early 1960’s with her two young boys where she met her husband, Larry Holm. They married in Reno NV. April 29, 1972. They relocated to Dayton NV. in 1995. She worked as a Telecommunications Specialist Supervisor for Pacific Bell. In her spare time she loved boating the The Delta with friends and family, doing embroidery and crochet projects, and watching 49er football games. She was an active member of the Sweet Adaline Singing Group. She retired from Pacific Bell with over 30 years of service. She remained in her home in NV after being widowed in 2005. She adopted a dog named Chika, who brought her much joy. She was a member of St Ann’s Catholic Church. She passed away at Carson Tahoe Regional Medical Center due to Cardiorespiratory Failure and complications due to Covid-19.

Connie is predeceased by her husband Larry Holm and her Son Steven Whiteside.

Everyone would remember Connie as someone who enjoyed her quiet time and lived in the present. She was an excellent planner and worked to stay ahead. She loved and was very dedicated to her family. She leaves a hole in the world that can only be filled with our cherished memories.