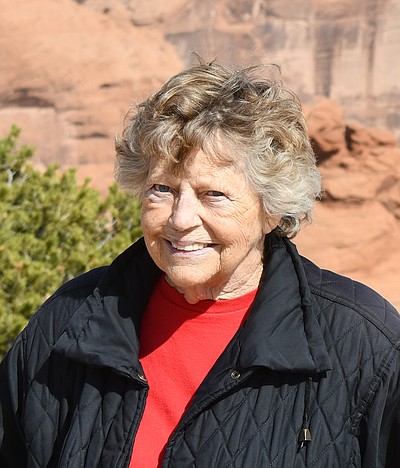 Carol Jean Drinkwine (née Corbin), late of 1508 Wildflower Ct, Gardnerville, NV, passed away Friday, October 15th at 8:15 am in her motorhome of renal (kidney) failure, after a long illness, with her husband at her side caressing her cheek through her final breath. She was 75 years old.

Carol was born May 9, 1946 in Charleston, WV. She was the youngest child of the late Oscar James Corbin and the late Marjorie Mae Corbin (née Niday). Also, preceding her in death was a brother George Corbin.

She met Keith while they were both working at McDonnell Douglas, Monrovia, CA. In October 1993, they began dating. They moved in together and were wed September 2nd, 2000 in Issaquah, WA.

She was an avid craftswoman, gardener, etc., loved to work with her hands, and until arthritis made it too difficult, loved to sew. At one point, she designed her own stuffed bear and made about 50 of them for family, friends, etc. Some still survive.

She worked many jobs but was proudest of her time at McDonnell Douglas Corp in Monrovia, CA, where she earned a Certificate of Management from UCI, Extension and rose to become an Administrative Analyst (Logistics Engineering).

After retiring, She, Keith, and their cat Mitsy began to travel extensively in their motorhome. In 2019, although her health was already beginning to decline, they were on the road for eight months, during which they travelled through 35 states and 5 Canadian provinces and from the Pacific Coast to the Atlantic Coast.

She loved nature, animals, trees, flowers, and the outdoors in general. She loved to travel, camp and experience all she could. It was often said of her, that she was a different person during and after camping, full of internal peace and enjoyment. She especially loved the oceans, mountains, trees, and wildlife. A favorite destination was North Cascades National Park, and she had a particular love of bears.

As a lover of all animals, she belonged to many animal rights and animal survival groups. She also actively participated when she was able. Two included donating several months at a wildlife sanctuary in Southern California and becoming a foster parent for six litters of kittens for the ASPCA of Reno, NV.

She was a devoted Christian and avid follower of Our Lord, Jesus Christ.

She opted for cremation, without a viewing or funeral service. She has asked that her ashes be buried along with trees at several locations as a symbol of renewal and rebirth. Future Celebration of Life ceremonies will be held in the spring. Keith will be handling arrangement of these. Cremation is being handled by Eastside Memorial Park, 1600 Buckeye Rd, Minden, NV 89423.