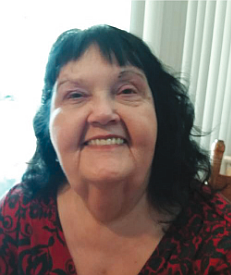 Born to Leon and Esther Brady in Detroit, Michigan on May 14th, 1947. Sandy married the love of her life Roger Miller on August 26th, 1974. Together they raised 5 children. She proudly served as a Navy wife from 1974 to 1993. She moved to Fallon, Nevada September 9th, 2004. Sandy worked many jobs but her favorite one was a projectionist at the drive-in movie theatres.

She was raised on a farm in Michigan and had a great love for animals. She loved playing card games, making pies from scratch & canning everything she could. Her favorite holiday was Christmas and any other one that the whole family could be gathered together at. Her greatest love was her family, they always came first. She had the gift of gab and made many lifelong friends who are loved like family. Sandy found the Gospel Light Baptist Church
in 2009 and was baptized right away by Pastor Robinson.

Sandy leaves behind a large extended church family that she loved very much.