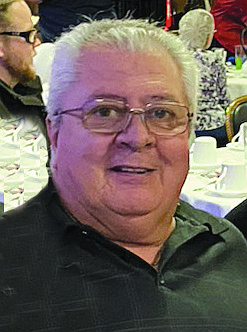 He was born in Carson City on August 28, 1955, to Joseph and Lois (Rupert) Dolan. Kevin grew up with his Grandparents, Sybil and Harold, his Great-Grandfather Henry Moses, and the extended Rupert Family. He attended Carson City Schools and Job Corp at Missoula, Montana.

Kevin married Debbie Schull on January 16, 1993 and became the Stepfather to Justin and Destiny Schull. Together, Kevin and Debbie founded and owned High Rollers Painting with Destiny eventually becoming co-owner. Destiny and Debbie will continue the legacy of the company he built.

He loved music and, in his younger years, played the drums on and off with several local groups. He loved attending car shows and camping with family along the Walker River. Kevin was quiet, kind and had a wonderful sense of humor. He loved his family and, in later years, became a loving “Papa” to Destiny’s children, Lexi, Meadow, and Jaci. He loved his four fur babies that were always on his lap whenever he sat down.

Kevin, your kind and loving ways will be missed by so many. Your passing has left an empty place in our hearts, but we are comforted that you are free of pain and surrounded by the love of those who have gone before you.

At Kevin’s request, no services will be held.