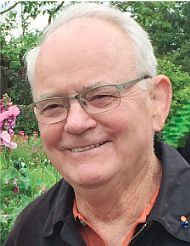 Even though Jack suffered for almost a decade with Alzheimer’s he never lost his sense of humor and mischief. He loved his wife and he loved their Siamese cats. To the very end of his life, the cats were a comfort to him. He appreciated good clothes and dressed well
even as his mind became more and more confused. Although his parents and brother Bill pre-deceased him, Jack often felt their presence during the latter years of his life. He sometimes would ask who was dead, them or him. They often kept him company during long days.

Jack loved cars and motorcycles and, after an early career in finance in New York City, finished his career working for Cycle magazine. He began wrestling in high school and became a nationally ranked wrestler while at Yale. He also worked as a golf caddy which led
to a lifelong enjoyment of the game. He attended Yale University on a scholarship, graduating with a history degree, and continued on to earn an MBA from the University of Chicago.

Thirty years ago, friends introduced Jack and Lillie to Bridgeport and Twin Lakes. Lillie had spent time there as a youngster and they were fortunate to find a wonderful little cabin to purchase. They also bought and remodeled a home in Jacks Valley and began retirement. Jack continued to enjoy golfing, even though reliable sources say he might not be trusted with a score card. He and Lillie loved to travel and visited all seven continents. Jack
especially loved the pre-historic cave paintings in France. During the summers they kept fit by biking, hiking, and fishing from their cabin at Twin Lakes. Jack also volunteered his time on Forest Service hikes, and with self-help groups including visits with prisoners.

Jack is survived by his wife, Lillie Tallman, niece, Julie Kohr, of Michigan and nephew, and William (Bill) Kohr and his family, of Illinois. Jack never missed an opportunity to be a beloved Uncle and Great Uncle of Will, Jamie, and Jack “the younger”. Jack will be remembered by
his family and friends as someone who brought love and laughter to everyone with his big heart and ability to see the humor in all.

A memorial service will be held on November 20, 2021, at 1:00 PM at St Gall’s Catholic Church in Gardnerville with a reception to follow.

In Lieu of Flowers, the family would like donations sent to Carson Valley Trails Association,
https://carsonvalleytrails.org/ or PO Box 222, Minden NV 89423