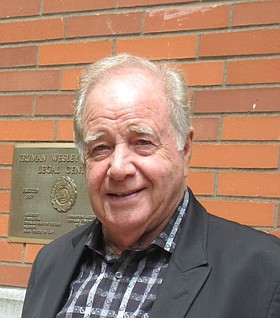 On Friday, October 30th , Carson City lost one of its own. David Merrill Leid, age 80, succumbed to a long battle with pneumonia, tragically brought on by Covid-19. For 60 years, this wonderful man blessed our quaint town with his warmth, humor, and his infectious personality. Although not a Native Nevadan, he always considered this great state as his own. David was born on October 3rd, 1940 to his Mother, Alice and Father, Harry in Climyer, New York. There he learned the value of hard work and family while being raised on the family farm; lessons he carried on through the entirety of his life.

Those of us who knew David knew that simple farm life wasn’t enough for him. After many years on the farm, he decided to serve our country by joining the U.S. Air Force in 1959. Throughout his time spent in the Air Force, he was stationed in Lackland Air Force Base, Shepard Air Force Base, and finished his time in the military at Nellis Air Force Base where he worked his way up to crew chief of the F105 fighter jets and mechanic for the Thunderbirds. While stationed at Nellis, in Las Vegas, he met the love of his life, Roxann. After years of courting, David married Roxann at Harveys Casino in Lake Tahoe in 1964. They stayed in Lake Tahoe for several years while David worked for his Father-in-law, Bobby Page. After working with Bobby, David made the choice to purchase the Carson City location, which still stands today as a proud Northern Nevada company. As the company grew, so did his family. He went on to have two children, his daughter, Janet, and his son, Kevin.Although many will always remember David for his spot on the counter at the Carson City Bobby Pages,we will remember him as so much more. When he wasn’t leading his business, David was an avid sportsman. He was always the first up and ready to go; whether that was getting the boat ready for fishing, or making sure we had powdered donuts for the early morning drive to the mountains. When he wasn’t wandering the beautiful Nevada countryside, you could find him playing golf; playing poker; or traveling with his closest friends. David was a competitive man; whether it was on the golf course or the felt of the poker table, he loved to be in the game. Although he played to win, his real takeaway was the time spent and the comradery of friends and family. When David wasn’t stacking his chips, he loved to travel.

During David’s last trip in 2018, he made his way to the far east where he visited Mongolia and China and stood on the Great Wall. Even though David had wandered the world, he always had a soft spot for Northern Nevada. He was a lifetime member of the Carson City Rotary Club, and a proud member of the Carson City community, both in business and in life. Although David is gone, he will be met at the gates by his loving wife, Roxann, and his parents, Harry and Alice. David’s legacy is carried on by his family: daughter and son-in-law, Janet and Steve Wells, his son, Kevin Leid and Amy Jensen, his daughter-in-law, JoDee Leid, and his partner Naran Wanger; as well as his grandchildren: David Leid, Sydnie Wells, Daria Leid, Kelsey Wells, and Sydney Llyod, along with his great-grandchild, Tyson Angus.

To our Dad, Grandpa, and Great Grandpa,
Forever gone, but NEVER forgotten.

To show our appreciation for the amazing and compassionate care David received, the family asks that gifts be made in David’s honor to the Carson Tahoe Health Center for Philanthropy to support Cardiac Rehab Services at Carson Tahoe. To make a gift, visit the online giving portal (https://www.carsontahoe.com/give.html) or send a gift to:

Checks should be made payable to the CTH Center for Philanthropy
and you may designate
“David M. Leid” as the impact area when making a gift