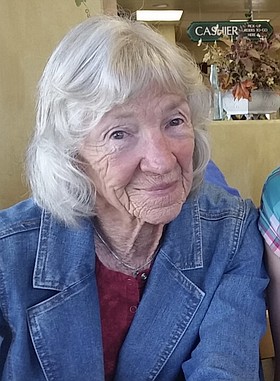 Earline “Billie” Bullard Dilbeck, age 90, of Carson City, NV, passed away peacefully at home on January 7, 2021, surrounded by her family after a month-long battle with pancreatic cancer.

A kind and caring woman, Earline dedicated her life to her family and friends. She was a mother, a grandmother, a great-grandmother and even a great-great-grandmother and was loved by all who had the privilege of knowing her. She loved her family and was a true example of grace. Earline was a very giving woman, who always lifted others up. She loved her Lord and Savior and felt like she got through every day with the help of Him. Earline was a proudly enrolled member of the Choctaw Nation of Oklahoma and had a deep love for her people and culture.

Earline was born in Shady Grove, (rural Pittsburg County) Oklahoma on September 20, 1930. Her fondest memories always involved her childhood of climbing oak trees, playing with wildlife, and spending time with her cousins. Earline moved to Hawthorne in 1944 where she met her late husband, Benson “Hunky” Dilbeck. Earline and her family moved to Carson City in 1973.

Earline worked as an operator for Nevada Bell in Reno, and in the gaming industry at El Capitan in Hawthorne, and the Carson Nugget. At one time she co-owned and operated a boutique, “The Particular Penguin” in Carson City that catered to those requiring black and white attire.

In lieu of flowers, memorial donations may be made in Earline’s name to the Chahta Foundation, PO Box 1849, Durant, OK 74702 - chahtafoundation.com

A graveside farewell ceremony for family and friends is planned for June 4, 11:00 at the Hawthorne City Cemetery in Hawthorne, NV with a picnic following at Lion’s Park in Hawthorne