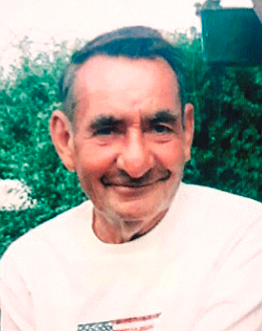 Angelo or “Andy” as he was widely known passed away at home on May 18, 2021 surrounded by his family after losing his battle with cancer.

He grew up in the Cortez area near Elko where his father worked for various gold mining camps as a welder and heavy equipment mechanic. After his death Angelo re-located with his mother Josephine to Carson City where he learned his trade in Auto Body Repair. During his career he worked at different shops in the area including Empire Auto Body, Preferred Auto Body and others earning a reputation as a skilled tradesman at his craft. The last several years he spent as co-owner of Mason Valley Auto Body in Yerington, Nevada until his retirement.

During his retirement and at his leisure he always had a vintage car in the process of restoration and when he wasn’t doing that he was hard at work meticulously perfecting the beautiful rock wall he built and that he became known for that ran the perimeter of the 1 1/2 acres his home sat on. A lot of hard work went into that wall over 30 years and within its walls his love of gardening and collection of antique auto memorabilia, strategically and neatly placed throughout the entire property in Stagecoach was evident with never a rogue weed in sight.

Angelo was preceded in death by his parents, infant brother Leonard and older brother John E. Manconi in 2019.

He is survived by his wife Jan of 45 years, his sons Angelo Jr and Sean and their families including grandson Andrew McCoy, his mother Debbie, granddaughter Sandy McCoy of Germany, niece Jackie of Carson City and nephew John of Denver. Angelo, Andy, Dad, Grandpa, Unky, you have been well loved and will most definitely be missed. With you goes a piece of each of our hearts.

God looked around his garden and found an empty space. He then looked down upon the earth and saw your tired face.

He put his arms around you and lifted you to rest. God’s garden must be beautiful..He always takes the best.

He saw the road was getting rough and the hills so hard to climb, so He closed his weary eyelids and whispered..Peace be thine.

It broke our hearts to lose you but you do not go alone.For part of us went with you The day God called you home.

A celebration of life and barbecue will be held in honor of Andy on Sunday June 27th beginning at 1PM at son Angelo’s home for friends and family.9438 Iroquois Trail
Stagecoach, NV. Please RSVP 775-720-0418