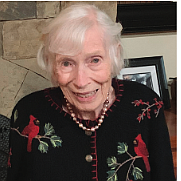 Filippa “Phyllis” Thistle, age 99 years, passed away on Wednesday, November 24, 2021, at her home in Gardnerville, Nevada, with members of her beloved family by her side. She was born on March 12, 1922, in Washington D.C. to parents Robert and Genevieve Annan.

Filippa attended high school at the Georgetown Visitation Academy in Washington, D.C. where she studied Latin and French. She also excelled in art, particularly sculpture and portrait drawing and played on the basketball team. Her fellow classmates fondly nicknamed her “Flip”. Upon graduation she attended the Strayer Business College.

She began her career with the U.S. Federal Government War Manpower Commission, and held various positions in Washington, D.C., New York, Portland, OR, Long Beach, CA, Boulder City, NV, and Phoenix, AZ. While working at Luke Air Force Base in Arizona, she met her husband Franklin Thistle and they eventually moved to Woodland Hills in Southern California and raised their family.

She worked at home assisting her husband in his writing and publishing career. After her children were grown, she went back to work outside the home and retired at the age of 72 and then moved to Northern California to be near her two grandsons as they grew up. At the age of 95 she moved to Gardnerville, NV.

Spring and Summer were Filippa’s favorite seasons in the Carson Valley as she enjoyed watching all the pretty birds and the beautiful wild flowers in bloom. An avid weather aficionado, she loved tracking the weather reports on the internet with her Ipad throughout the four seasons. Her love of dark chocolate and Mint Chip ice cream may have been one of her secrets to a long and happy life.

Her attributes were many. Her kindness, sincerity, generosity, and sweet gentle soul touched all those that knew and loved her. She would often greet her family in the morning with the phrase ‘carpe diem’ the Latin phrase for ‘seize the day’, as she was one who greatly appreciated the value of every moment in life. She was loved more and will be missed more than any words could ever express.

A private family memorial celebration of life will be held in Arizona on what would have been her 100th birthday.