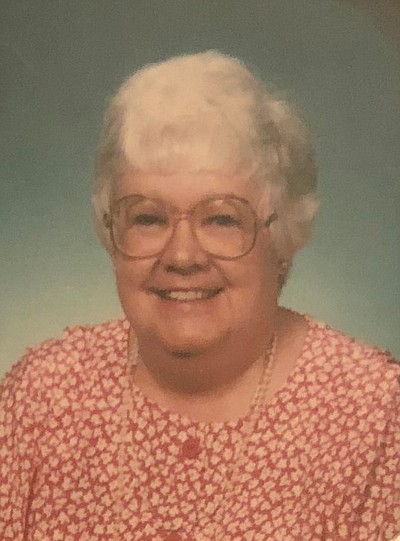 Surrounded by her family, Thelma passed away on April 24 from complications of dementia. She grew up in West Seneca, New York, where she excelled in school and began her lifelong love of reading historical novels for pleasure. She liked books with happy endings. She used to tell us that if you read you will never be bored. Thelma was Salutatorian of her high school senior class. She joined the U.S. Navy at 18 years old and served during the Korean War as a WAVE.

Thelma met Roland (Rollie) at Lockheed in Sunnyvale, California, in 1961. They had a whirlwind romance and married a year later. Thelma worked at Lockheed for many years, involved in programs such as “Space Telescope”. She was smart, organized, and kept detailed records. Her peers at Lockheed nicknamed her the “Closer” because she always got the job done. One of her bosses stated respectfully that “if anyone should be in charge of Ft Knox, it should be Thelma”.

Together, Thelma and Rollie raised their five children in Campbell, California. Thelma volunteered for many of her children’s sports teams and other activities through the years.

Thelma and Rollie traveled extensively. They especially loved taking cruises, 29 in all. They had many fun adventures on their cruises. Some of the passengers became lifelong friends. Thelma was proud of her Scandinavian heritage and made numerous trips to Norway and Sweden to connect with her relatives.

Thelma and Roland retired to Carson City, Nevada, in 1991, where they continued to be host to their extended family and many friends. Thelma volunteered as a docent at the Carson City Mint and the Railroad Museum. She was a generous and fair person, always making sure all her kids were treated the same. Her license plate was “My Treat” which made everyone smile. She was known for her sweet tooth, sometimes ordering dessert as her main course.

Thelma was preceded in death by her husband, Roland.

The family would like to thank Naima and Fred at Whispering Heights Assisted Living Facility, for their loving care of our mother these past four years.

No special services are planned. Please read a book with a happy ending in her memory.