This composite product image provided by Apple shows varieties of the new iPod Touch, available for sale on Wednesday, July 15, 2015. Apple is refreshing its iPod Touch music player for the first time in nearly three years, as the company seeks to make music a central part of its devices once again. (Apple via AP) 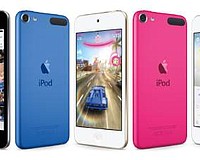 NEW YORK — Although the iPod’s popularity has waned, Apple is updating its music player for the first time in nearly three years by giving the flagship Touch model a faster processor and better cameras.