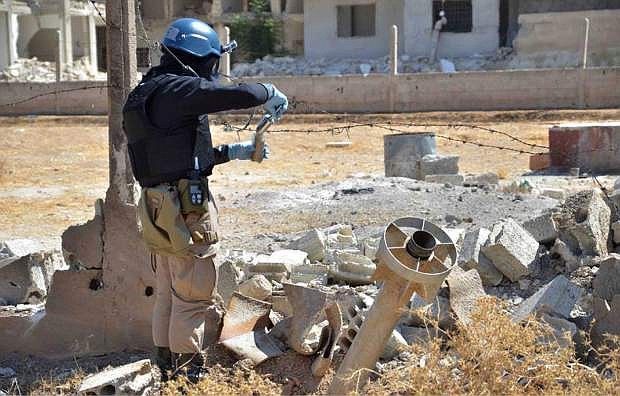 FILE - This Wednesday, Aug. 28, 2013 citizen journalism file image provided by the United media office of Arbeen which has been authenticated based on its contents and other AP reporting, shows a member of UN investigation team taking samples of sands near a part of a missile that is likely to be one of the chemical rockets according to activists, in Damascus countryside of Ain Terma, Syria. Syrian opposition activists and other witnesses tell The Associated Press that Syrian government forces have attacked rebel-held areas with poisonous chlorine gas in recent months. They say the attacks left scores of men, women and children coughing, choking and gasping for breath. The reports have been denied by the Syrian government and have yet to be confirmed by any foreign country or international organization. But if true, they highlight the limitations of the global effort to rid Syria of its chemical weapons. (AP Photo/United media office of Arbeen, File) 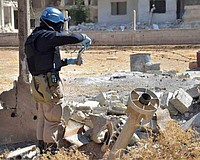