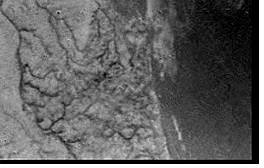 ** RETRANSMISSION TO ADD CAPTION INFORMATION ** This is a European Space Agency image from the ESA&#039;s webside taken on Friday Jan. 14, 2005, after the Huygens space probe beamed data including this image back to earth through its Cassini mothership orbiting Saturn&#039;s moon Titan. This is one of the first raw images returned by the ESA Huygens probe during its successful descent. It was taken from an altitude of 16.2 kilometers (about 10 miles) with a resolution of approximately 40 meters (about 131 feet) per pixel. It apparently shows short, stubby drainage channels leading to a shoreline. (AP Photo/European Space Agency/NASA) ** FOR EDITORIAL USE ONLY MANDATORY CREDIT: EUROPEAN SPACE AGENCY/NASA) ** 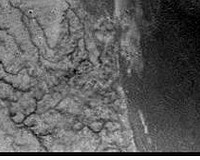