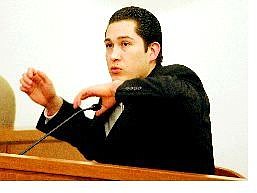 BRAD HORN/Nevada Appeal Maximilliano Cisneros describes how he was afraid he was going to be shot when he opened fire and then ran, leaving one man dead and another injured. Cisneros took the stand to answer charges of second-degree murder and attempted murder in connection with the May 24, 2004, shooting. 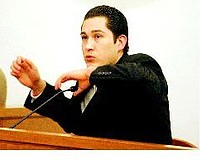 Defendant in murder trial says he was reacting to threat