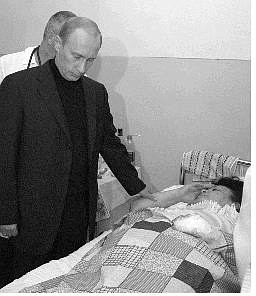 Russian President Vladimir Putin visits a hospital in Beslan, Northern Ossetia, to meet victims of the hostage crisis Saturday. Below, a boy, who wasn&#039;t a hostage, looks around a literature classroom in the school seized by terrorists, in Beslan, North Ossetia on Saturday. More than 350 people were killed in a southern Russian school that had been seized by militants, a prosecutor said Saturday. Associated Press 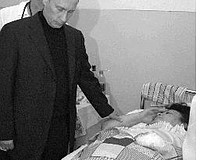