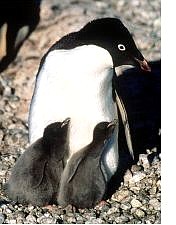 In this undated photo released by the Australian Antarctic Division, an Adele penguin and her two chicks are seen in the Antarctic&#039;s Cape Royds. Tens of thousands of Antarctic penguin chicks face death by starvation in the next few weeks as a huge iceberg blocks access to ocean-feeding grounds. Associated Press 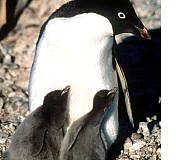