BRAD HORN/Nevada Appeal Above: Ron Young watches coverage by CNN and &#039;CBS Evening News With Dan Rather&#039; on a big-screen television before his speech at the Carson Nugget on Friday evening. Top, left, Young is shown with his mother on CNN after being rescued. Center, Bill and Angela Miles listen to Young speak. He is shown on CNN, right, after his capture. 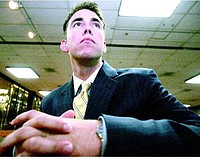