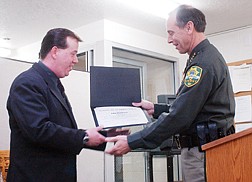 John Henderson, left, recieves a certificate from Carson City Sheriff Kenny Furlong for his actions to help restrain a man armed with several weapons who entered K-Mart Jan. 16. Henderson, an employee of K-Mart and two other employees, Bob Cary and Robin Cooper, restrained the man until the Carson Sheriff&#039;s department was able to take the man into custody. Photo by Brian Corley 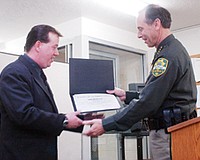