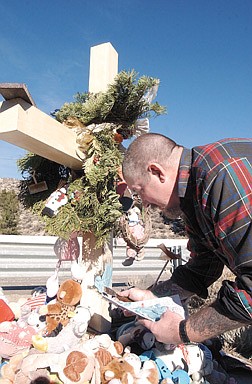 Gary, who asked not have his full name printed, puts a wood poxy filler Sunday afternoon on the Krystal Steadman Memorial along Hwy 50 after a vandal tried to cut the cross down with want is thought to be a chainsaw. The cross had a gash in it down to where steal railroad track was used as a reinforcement to prevent the cross from being cut down or taken after a previous memorial was taken just hours after it was erected. Photo by Brian Corley 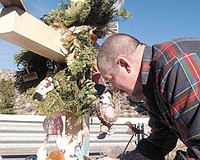