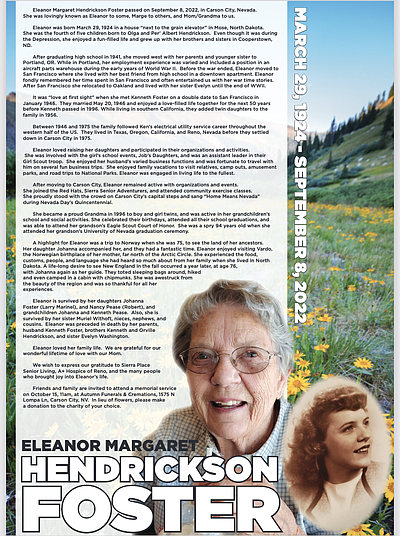 Eleanor Margaret Hendrickson Foster passed on September 8, 2022, in Carson City, Nevada.
She was lovingly known as Eleanor to some, Marge to others, and Mom/Grandma to us.

Eleanor was born March 29, 1924 in a house “next to the grain elevator” in Mose, North Dakota. She was the fourth of five children born to Olga and Per’ Albert Hendrickson. Even though it was during the Depression, she enjoyed a fun-filled life and grew up with her brothers and sisters in Cooperstown, ND.

After graduating high school in 1941, she moved west with her parents and younger sister to
Portland, OR. While in Portland, her employment experience was varied and included a position in an aircraft parts warehouse during the early years of World War II. Before the war ended, Eleanor moved to San Francisco where she lived with her best friend from high school in a downtown apartment. Eleanor fondly remembered her time spent in San Francisco and often entertained us with her war time stories. After San Francisco she relocated to Oakland and lived with her sister Evelyn until the end of WWII.

It was “love at first sight” when she met Kenneth Foster on a double date to San Francisco in
January 1946. They married May 20, 1946 and enjoyed a love-filled life together for the next 50 years before Kenneth passed in 1996. While living in southern California, they added twin daughters to the family in 1956.

Between 1946 and 1975 the family followed Ken’s electrical utility service career throughout the western half of the US. They lived in Texas, Oregon, California, and Reno, Nevada before they settled down in Carson City in 1975.

Eleanor loved raising her daughters and participated in their organizations and activities.
She was involved with the girl’s school events, Job’s Daughters, and was an assistant leader in their Girl Scout troop. She enjoyed her husband’s varied business functions and was fortunate to travel with him on several fun business trips. She enjoyed family vacations to visit relatives, camp outs, amusement parks, and road trips to National Parks. Eleanor was engaged in living life to the fullest.

She became a proud Grandma in 1996 to boy and girl twins, and was active in her grandchildren’s school and social activities. She celebrated their birthdays, attended all their school graduations, and was able to attend her grandson’s Eagle Scout Court of Honor. She was a spry 94 years old when she attended her grandson’s University of Nevada graduation ceremony.

A highlight for Eleanor was a trip to Norway when she was 75, to see the land of her ancestors. Her daughter Johanna accompanied her, and they had a fantastic time. Eleanor enjoyed visiting Vardo, the Norwegian birthplace of her mother, far north of the Arctic Circle. She experienced the food, customs, people, and language she had heard so much about from her family when she lived in North Dakota. A life-long desire to see New England in the fall occurred a year later, at age 76, with Johanna again as her guide. They toted sleeping bags around, hiked and even camped in a cabin with chipmunks. She was awestruck from the beauty of the region and was so thankful for all her experiences.

Eleanor is survived by her daughters Johanna Foster (Larry Marinel), and Nancy Pease (Robert), and grandchildren Johanna and Kenneth Pease. Also, she is survived by her sister Muriel Withoft, nieces, nephews, and cousins. Eleanor was preceded in death by her parents,
husband Kenneth Foster, brothers Kenneth and Orville Hendrickson, and sister Evelyn Washington.

Eleanor loved her family life. We are grateful for our wonderful lifetime of love with our Mom.

We wish to express our gratitude to Sierra Place Senior Living, A+ Hospice of Reno, and the many people who brought joy into Eleanor’s life.

Friends and family are invited to attend a memorial service on October 15, 11am, at Autumn Funerals & Cremations, 1575 N Lompa Ln, Carson City, NV. In lieu of flowers, please make
a donation to the charity of your choice.