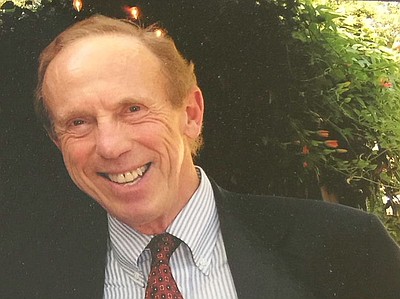 Bruce Allan Blinn of Genoa, Nevada, passed away peacefully at home on September 14, 2022 with his devoted wife, Pamela, surviving son, Jason, and daughter-in-law, Kathleen beside him. He suffered declining health for several years and fought his illnesses bravely and with good humor.

Bruce was an outgoing, generous and warm man with an impish sense of humor. He loved making people smile and laugh. He was as “bright as a button”, an athlete, lover of nature, music and books, deeply spiritual, a student of history, he kept a sharp eye on all things financial ... and he loved his Country. Above all, he was a lovely human being ...
kind, understanding and with a tender heart.

Bruce was aged 88. He was born on Long Island, NY, the younger son of the late Dr. Jack J. Blinn and Bertha Blinn (nee Levy). His older brother, Martin, predeceased him.

Bruce remained active in many organizations, including various Chambers of Commerce, The Olympic Club, Kiwanis, the West Point Inn Association, Toastmasters, and S.C.O.R.E. (Service Corps of Retired Executives) where he mentored businesses and individuals.

Music and singing were a huge part of Bruce’s life. He sang in the Brown Chapel Choir and the Olympic Club Chorus. It wasn’t unusual for him to burst into song – especially those of Frank Sinatra and Tony Bennett - and he knew all the lyrics!

For years, Bruce and Pamela lived in Marin County, California (a suburb of San Francisco). They hiked and backpacked over the many hills and valleys in Marin, as well as in their beloved Yosemite and The Trinity Alps.

In 2018 Bruce and Pamela moved to Genoa, NV, where they have made valued friendships. Bruce savored the rural environment, and relished the natural beauty of his surroundings - he especially loved Job’s Peak and stood in awe as the mountain scenery changed through the seasons.

A private Jewish family service was held for Bruce following his death. A “Celebration of Life” will take place for family and friends in the coming months.

Bruce’s Prayer: “Bless all those who are cold, lonely, hungry and afraid.”